I know that I am not a parent, well at least to some degree. I guess you could say that I am a parent to the 61 kiddos living here or that I’ve had a lot of experience working with kids whether at school or with my nieces and nephews, regardless I think that as a parent (or even an adult figure) we want to teach our kids the importance of serving and loving on others.  As Christians we are called to humble ourselves and serve others. So as any other parent would want to teach their children to serve and love on others, so do I; with my 61 children.

Living in Haiti requires me to think outside the box in ways that I can get my kids involved in serving the people of Haiti, especially in Titanyen. Serving opportunities look different for every age; but the other day I was able to serve with a few of our older boys and one of our security guards. 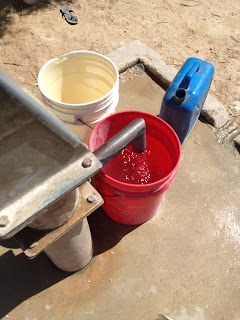 Water is something we take for granted; even here at Grace Village I often take it for granted that we have running water to shower with, or brush my teeth with, or to cook with. When just outside our gates people don’t have that. They rely on getting water by walking to the well with their empty buckets and having to pump the water and then carry it all home. It has been on my heart lately; as I drive by these people almost daily standing at the well pumping water into their buckets and having to carry them back to their homes, that one day I wanted to just stand down there and help people pump the water.

The other day was another one of those moments that makes my heart happy. I was blessed to be able to take three of our older boys and one of our security guards and go serve at the water well. 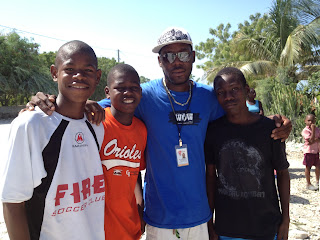 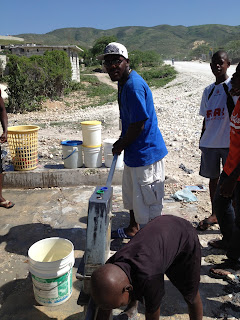 Basically, people from the community bring their big 5 gallon buckets to these wells and start pumping. The other day these boys were able to bless those at the water well and do the work for them. Keep in mind that these people have to walk to the water well, pump the water, and then walk back with bucket full of water…day after day. I realized that pumping the water looks a lot easier than it really is. I can’t imagine having to do that every time I wanted or actually needed water. It’s a process and takes time, as you have to wait for those that were there before you to fill their buckets.

The boys did an awesome job. As we were there I didn’t know what they were thinking or if they thought I was crazy for asking them to come with me and do this, but as we were walking home they made my heart happy. One of the boys asked me if we were going to do this again tomorrow or if we could do this everyday. Talk about making a mother proud! ;) I asked them if they wanted to do this every morning and they said yes, but maybe we should bring some more boys with us. As they found out today it’s a lot of work. 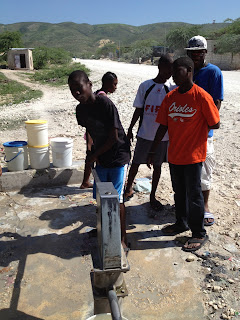 As I debriefed with the boys about their experience serving; it again made my heart happy to hear about how it made them feel. Alex told me that it made him feel very good because he was helping the people. He also told me that if he had to do that for water it would be very discouraging. I asked him if he felt that the people there where discouraged or sad and he said, ‘No, its their way of life.’ It makes me very thankful to have running water and not to have to do that. 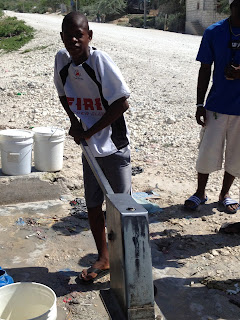 Shadley told me that it also made him very happy when he was helping them because he felt like he was working like a Samaritan. It made him sad that the people had to get their water this way and he was also very appreciative of the running water we have at Grace Village. 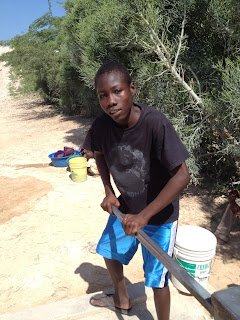 Schneider also explained how it made him feel good to help them get water because it pleases God to help others. He also talked about how it would be very tiring to have to do that all the time. He too was also very appreciative of the running water we are so blessed with here at Grace Village. 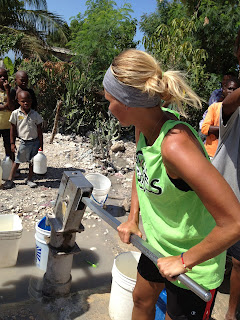 When I asked the boys about if they would want to do it again they all said yes they really wanted to do it again. I asked them if they could think of other ways in which we could serve the people in Titanyen or what else we could do when we went to help them at the well. Alex suggested that we could pray with them. I also suggested to them that maybe we could help them carry the water buckets back to their house and they said they would like to do that and are excited to be able to serve in the community more often. 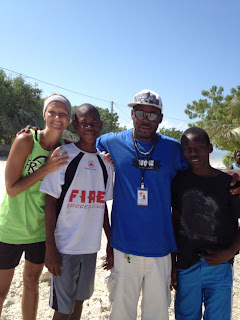 I am so blessed and thankful for the hearts of these boys. Please pray for opportunities in which we can continue to serve. Or if you have any good thoughts or creative ideas let me know! J